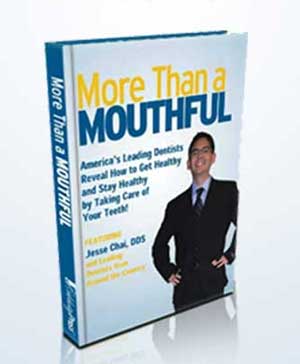 More Than A Mouthful – book by Dr Jesse Chai

Orlando, Fla.– January 21, 2013– Dr. Jesse Chai has joined a select group of the America’s leading dentists, along with noted dental marketing expert, Chris Griffin, to co-write the book titled, “Healthy Input: America’s Leading Dentists Reveal the Secret Truths to a Healthy Body, Starting with What You Put in Your Mouth!” The book was released by CelebrityPress™  – a leading business book publisher.

“Healthy Input” was released on Thursday, January 17th and the features top advice and practices from the leading dental experts from across the globes that are on the cutting-edge of their profession. Dr. Jesse Chai contributed a chapter titled “Sleep Apnea: ‘The Not So Silent’ Killer.”

Dr. Jesse Chai is the owner and senior dentist at Bradford Family Dentistry and has been recognised for his contribution to the town of Bradford, having won the Entrepreneur of the Year award in 2006, the Customer Service Excellence Award in 2011 and the highest honor, the Business Excellence award in both 2010 and 2012.  According to the Bradford Board of Trade this award is “presented to a business that has demonstrated outstanding characteristics in all areas such as performance, leadership, innovation, management, marketing and service.”

Dr. Chai is also a Best-Selling Author in the book, “More Than a Mouthful,” for which he received a Quilly award at the 2012 National Academy of Best-Selling Authors Summit and Golden Gala Awards in Hollywood, California. He has also been featured on Rogers TV and City TV.

The authors of “Healthy Input” cover a variety of topics including, routine care and maintenance of our teeth and gums, orthodontics, conscious sedation, sleep apnea, use of lasers for dental treatment, and the maintenance of our smiles.

The Celebrity Experts® in this book are dentists on the cutting-edge of their profession. The subjects they cover as part of their dental practice include routine care and maintenance of our teeth and gums, orthodontics, conscious sedation, use of lasers for dental treatment, and the maintenance of our smiles. These all add up to better health for us both physically and socially – an important byproduct of our Healthy Input.

After such a successful release, Dr. Jesse Chai will be recognized by The National Academy of Best-Selling Authors®, an organization that honors authors from many of the leading independent best-sellers lists.

Dr. Jesse Chai graduated from the University of Toronto, Faculty of Dentistry in 1998.  Early in his career he worked in nursing homes and around the Toronto area.  It was in the nursing homes where Dr. Chai realized the true impact of improper dental care.  After spending a year in Niagara Falls and Niagara-on-the-lake, he eventually settled in Bradford, Ontario, Canada.

Celebrity Press™ is a leading business, health and wellness book publisher that publishes books from thought leaders around the world. Celebrity Press™ has published books alongside Jack Canfield, Brian Tracy, Dan Kennedy, Dr. Ivan Misner, Robert Allen and many of the biggest experts across diverse fields.  CelebrityPress™ has helped launch over 500 best-selling authors to date. Here's How We're Keeping You Safe!

We've created New COVID Dental Safety Procedures to keep you and your family safe on your next dental visit.  Learn more here.

Dentistry From The Heart

Previous Post Smile Secrets of the Stars (How They Keep Them Looking So Good) Next Post Charity of the Month: Sick Kids Foundation