Vaping And Your Oral Health

Although you probably know smoking is bad for your health, many people seem to ignore the fact that e-cigarettes are just as harmful. Both “vaping” and smoking increase risk for health issues, including increased dental plaque and risk for gum disease. Here’s everything you need to know about vaping and oral health.

Vaping is using e-cigarettes to smoke. E-cigarettes are devices that use heat to produce vapour instead of smoke to inhale nicotine and other flavoured substances. Many view vaping as a healthy alternative to smoking cigarettes. In fact, many people will switch to vaping when trying to quit smoking. However, although vaping substances do have fewer chemicals than vaping nicotine or cigarettes, it also has its own set of unhealthy chemicals.

Why Is Vaping Dangerous?

The vegetable glycerine and propylene glycol used in vaping products are considered safe. They are also used in other approved products, from the cosmetics you wear to sweeteners in foods you eat and drink. Unfortunately over the long-term, how safe they are when inhaled has yet to be determined. There are also chemicals used in flavoured vaping products. These are safe for eating, but are not necessarily safe when heated and inhaled. 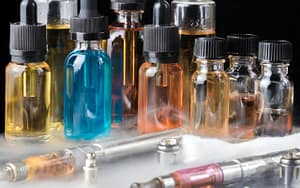 While vaping doesn’t burn the solutions used, the high heat is enough to generate chemicals, including poisons such as formaldehyde. Contaminants can also be released such as nickel, tin, and aluminum. How much is released when vaping is based on a long list of factors including:

While the amount of chemicals is much lower than cigarettes, there are too many unknowns currently to say vaping is safe.

E-juice is the flavoured substance used when vaping. It has its own harmful side effects. To avoid health issues it’s best to avoid vaping altogether. However, there are several types of e-juice that can be particularly harmful. Avoid e-juices containing:

It is probably hard to find e-juices without these ingredients, but the flavours that tend to contain higher content are creamy flavours containing diacetyl and an ingredient called cinnamaldehyde used for cinnamon flavours.

Who Is Vaping In Canada? 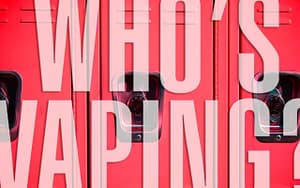 According to statistics, in 2017, 15% of Canadians said they tried vaping. The highest age groups were between 15 to 19 and 20 to 24. As well, 15% of those who vape have never smoked cigarettes and 20% were “former” smokers. Of those who either smoked or were former smokers, 32% said they chose vaping as an aid to quit smoking. The Canadian Students Survey showed 34% of students in grades 7 to 12 had tried vaping, 28% of which used nicotine.

What Are The Health Risks Of Vaping?

There are many health risks associated with vaping including:

Even if you are choosing an e-juice without the nicotine, the risks are many, including: 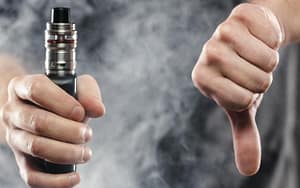 As already mentioned, the varying substances found in e-juice can be toxic when heated, leading to health issues.

The Impact Of Vaping And Oral Health

When looking specifically at your oral health, the nicotine used for vaping causes just as many issues as smoking cigarettes. The main issues with vaping and oral health include:

When vaping nicotine products, you reduce blood flow. This reduces the number of nutrients and oxygen reaching your gums. Without nutrients and oxygen, your gum tissue can die, leading to gum recession. While this might not sound so serious, receding gums can become severe enough to lead to painful tooth sensitivity, increase your risk for cavities, and increase the risk for tooth loss.

Dry mouth is not only uncomfortable but also bad for your teeth. Nicotine reduces saliva, which increases bacteria-causing tooth decay. Dry mouth can also cause bad breath, even when you use flavoured e-juice.

When you vape, the act of inhaling stimulates your muscles. The stimulation can cause you to grind your teeth. If you are a teeth grinder, vaping can make things worse. The clenching and gnashing of bruxism can lead to serious damage, from chips to enamel wear.

When using nicotine products, vaping can cause gum issues including inflammation and swelling. Combine these symptoms with dry mouth and the increased bacteria can lead to gum disease. The symptoms and potential risks of gum disease aren’t pretty: 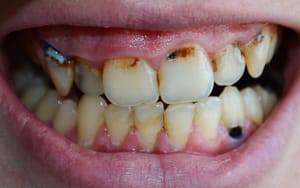 As you can see, vaping and oral health don’t make good bedfellows. Gum disease is really something you don’t want to deal with.

What About Vaping Marijuana?

Vaping marijuana or products containing cannabidiol or THC, also have some side effects to consider including:

THC products can produce a far more pronounced “high” which can be dangerous, especially when driving or trying to do something that requires focus. However, because CBD and THC oils also come in flavours, you should be aware they present the same health risks as any other flavoured e-juices.

As you can see, vaping is just as bad as smoking cigarettes even if you aren’t choosing an e-juice with nicotine. Perhaps worse is the fact there are still so many unknowns associated with vaping.

To have a dental checkup to see if vaping is impacting your oral health, call today to schedule an appointment 905-775-5307 or click here to request an appointment: